The Hole in Your Pocket 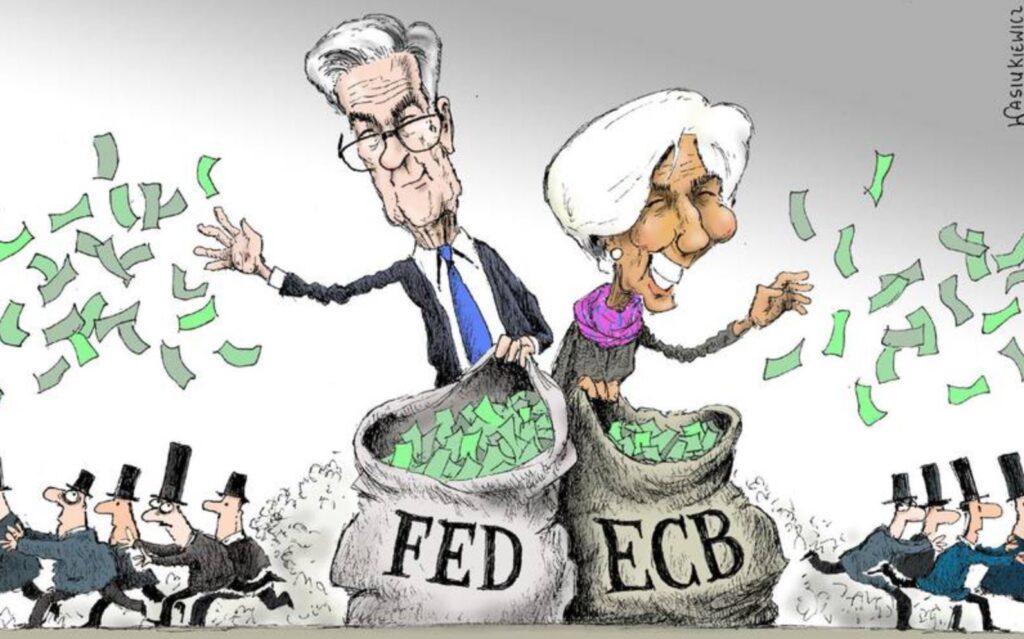 Before I start, I’d like to say that MarketCycle Wealth Management was just given a top 5-star rating by Investor .com

War costs more than ‘an arm and a leg.’

Money printing (a term that I am using loosely) to pay for the Vietnam War during the 1960’s,  along with then President Nixon replacing the Federal Reserve Chairman with his very own personal political hack and then taking the USDollar off of the gold (backed) standard, caused the USD to weaken and it naturally followed that the price of commodities and goods went up.  We didn’t earn the money that the United States spent, we essentially just printed it; we pulled it out of thin air.  Inflation is when the excessively created currency gets so weak that it takes “more” of the currency to buy the same item.  If it normally takes $50 to buy a pair of shoes, after high-inflation it takes $100 to buy the same pair of shoes.  Perhaps it takes $200 or $300 or even more to buy the same pair of shoes.  Right now, the inflation rate in Venezuela (at 2500%) is so bad that it might take a year’s salary to buy a pair of shoes and next week it might take two year’s salary.

So after the Vietnam War finally ended, literally everything cost more, and then a lot more.

In order to break the back of inflation, then Federal Reserve Chairman Paul Volker (appointed during President Jimmy Carter’s one term), gradually raised interest rates in the very late 1970’s and then the very early 1980’s, ending up at close to 20%.  Interest rates are currently fairly close to 0%, so imagine rates at fairly close to 20%!  My first home mortgage in the early-1980’s was somewhere around 15% and that creates a crippling monthly payment!

After Volker ‘broke the back of inflation’ with sky high interest rates in 1981, we experienced gentle deflation for forty years, like an autumn leaf gently and slowly falling from a tree, as interest rates drifted downward for that entire 40 year period; it ended just recently.  It took 40 years to go from 20% to 0%.  When rates fall, bond values rise, so bonds, as an asset class, benefited for forty years.

Back in late March of 2020, MarketCycle Wealth Management very accurately called the exact bottom of the Covid stock market crash (to the day).  And during the first week of April of 2020, and before anyone else, MarketCycle called the start of inflation.  By “the start of inflation,” I meant that, in my opinion, it represented the start of a prolonged secular 18-ish year period where inflation slowly and gradually builds for about 8 years, dips during a prolonged deflationary stock market event in the very late 2020’s, and then inflation takes off like a jet for the first 8-ish years of the 2030’s.

So, what’s my point?  Wait, do I even have a point??  Yes, my point is that the money printing to pay for the Vietnam War was nothing, it was trifling, it was insignificant.  Today, we’re talking about real money printing.  It started with monetary actions designed to pull the United States out of the Financial Crash of 2008 (which wasn’t a crash, it was actually an expected bear market).  But since the Covid-19 Crash of 2020 (a true ‘Black Swan’ crash), money printing has taken on a life of its own, especially under President Trump’s hand appointed Fed Chairman and wealthy idiot, Jerome Powell.  The most recent mess started with President Trump and is now in hyper-overdrive with President Biden.  We’re sending monthly checks to every child in the United States.  We’re sending so much monthly money to ordinary citizens that many people refuse to go back to work, post Covid.  The rush of cash has caused consumers to consume; everything imaginable has been purchased in mass and inventory is now kaput.  To make new inventory, commodities have to be purchased and now commodity stockpiles are going kaput.  Vicious cycle.  Money printing directly causes inflation AND ‘free’ money also causes consumers to gobble up every item in sight which also causes a powerful secondary level of inflation as commodities need to be replaced.  It is a vicious cycle that can only be broken by raising interest rates to astronomical levels, just as Paul Volker did in the past.

I recently saw a great (sustainable growth) mahogany porch swing on Amazon for around $150 and I wanted to consume it.  I waited one week to buy and saw the price at $250, so I waited a week for the price to drop again, only to find that it was now $400.  I decided to pass on the swing but still checked one week later to see this price: $550.  That is inflation.  And 8 months ago I ordered and paid for a new bike from ‘Bikesdirect.com’ and it still hasn’t come because wood prices have gone so high that the cost of the shipping crate is “too expensive” and now I’ll “just have to wait until lumber prices come down” and regardless, the bike shop will “lose money on the deal when the bike finally ships in another four months.”  Inflation is like having a hole in your pocket.

Of course, current inflation at this rapidly increased level is transitory; it is likely just a brief prelude to what the chronic hyper-stagflation of the 2030’s might look like.

In the United States, we now want more money in order to pay off everyone’s student loans.  We want reparations for the horror of slavery to the tune of $15-Trillion.  We want free allopathic drug care for all.  We want free pre-K schooling and free community colleges.  We want brand new infrastructure.  We want more powerful weapons.  We want to increase monthly allowances for those who irresponsibly have the most children.  We want to subsidize and fund and retrain.  We’re talking about implementing Modern Monetary Theory where everyone is paid a monthly salary by the U.S. Government just for being alive.  We will print and print and print and print and print (and tax)… and inflation will likely go to unimaginable levels.  But it is a slow moving boat.  At first the excess money will stimulate the economy, perhaps for another 8 years, but eventually the debt will come due and it will have to be paid.

Honestly, I am not making any sort of political statement, some of the above items are quite good for society.  I’m just saying that the market is sensing what’s coming:  INFLATION from money printing.   Well, actually it is sensing eventual HYPER-INFLATION or more likely HYPER-STAGFLATION (stagnant economy coupled with high inflation).  I see the end game as being a debt that is so high that it simply cannot ever be repaid and the Federal Reserve will be forced to drop rates to zero-% and then buy all of the debt of the United States government and make it disappear, interest free, on its hidden books.  Then the USDollar collapses in a deflationary spiral and our grandchildren will be the ones that have to clean up our economic mess  (and it may be too late for our environmental mess to be cleaned up).  But there is likely another 15 years between the party that we are living today and the economic depressionary mess that will have to be cleaned up.

You may have noticed that this isn’t another one of my ‘feel-good’ blogs and I do wish that I saw a different future, but nothing has changed in my mind.  In my opinion, we have another 8 great years of easy times because of easy money, and then a decade of worry and economic trouble that we have to prepare for now (by saving and investing every penny), and then we get the 2040’s which I’ll spare readers from having to hear my full thoughts on.  But to sound biblical, out of crisis cometh opportunity and out of ashes cometh fresh new growth… and sometimes we have to hit the bottom of the barrel before we can make any significant bounce toward positive changes.

However, the story for today is that out of money printing comes both growth and inflation… and out of inflation comes rate hikes… and out of rate hikes comes eventual stunted growth.

MarketCycle saw true inflation beginning back in the Spring of 2020 and I now foresee the Federal Reserve ‘talking about rate hikes’ in 2021, then the actual tapering of QE (which they have already secretly started) and then the Fed actually raising rates sometime in 2022 or even early in 2023.

Unlike during the past 40 years, bonds will get killed by these new ‘opposite-direction’ Central Bank actions, and this includes any ‘bond-like-assets’ such as preferred shares (although convertible bonds and high-yield bonds may survive).  So, we must prepare now.

There are assets that benefit from inflation and MarketCycle Wealth Management is already (slowly) rotating client accounts in that direction.  But most investors around the globe have been placed into 60/40 ‘buy-&-hold’ portfolios, and they are about to really get hurt.

SUMMARY:  Future hyper-stagflation with an “inflation is coming” warning shot being fired right now… but we are STILL in the stock bull market of our lifetimes and will remain so for quite awhile yet!  Don’t get side-tracked, take advantage of easy street while you still can!! 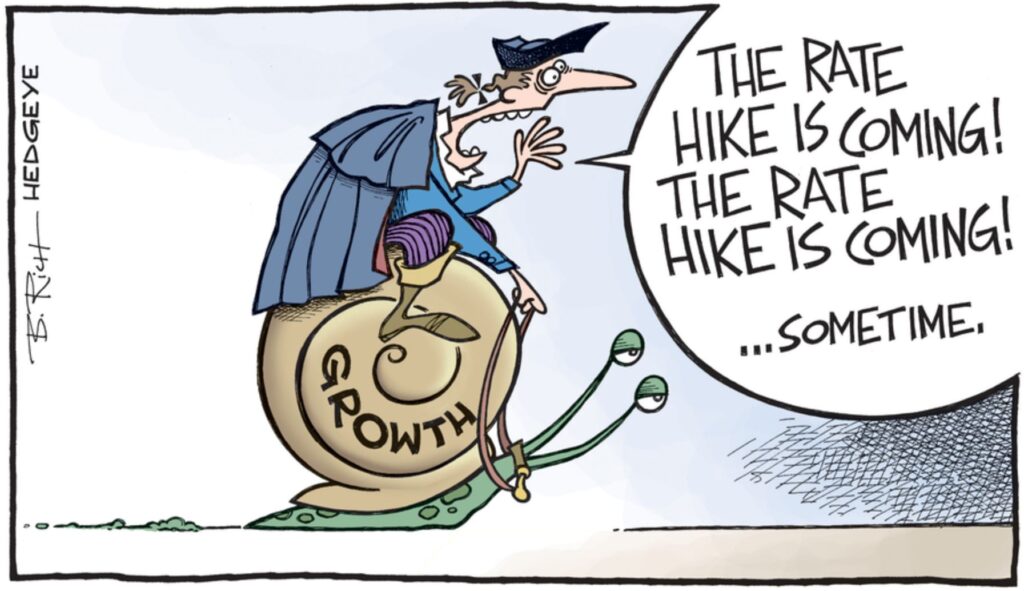 Did people spend their Covid stimulus checks on rent and food?  Apparently not.  They seem to have gone on a record consuming spree, gobbling up literally everything.  $2-Trillion is still sitting on the sidelines, waiting to drive up both the stock market and inflation: 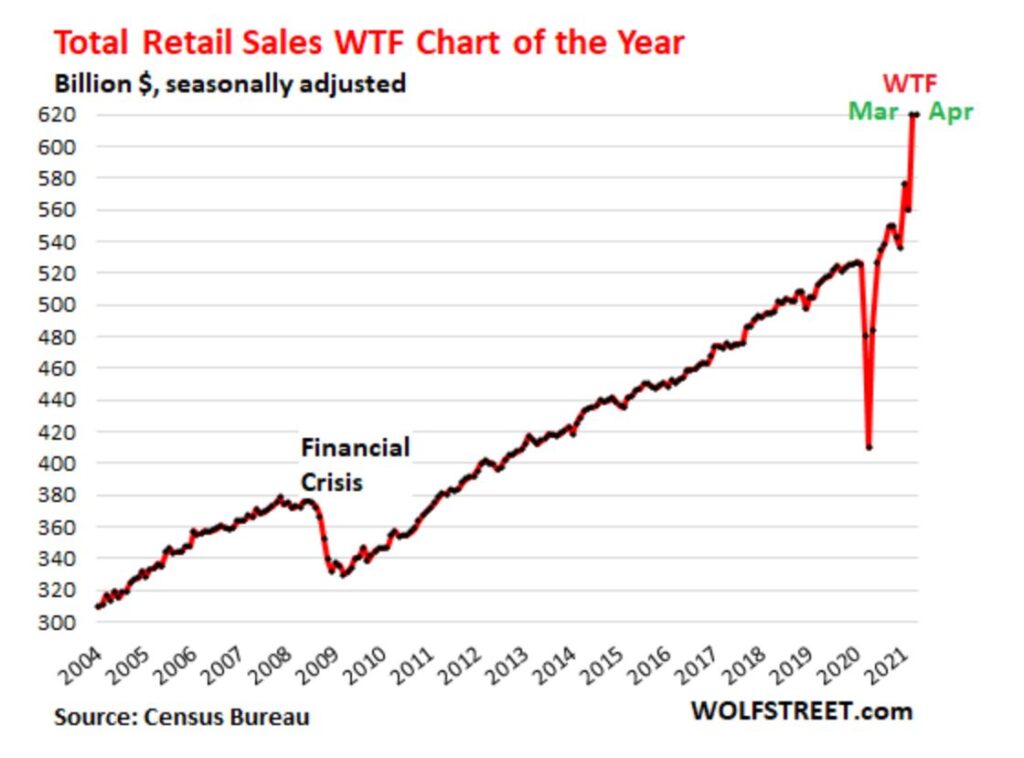 Who is the architect of our coming dilemma? 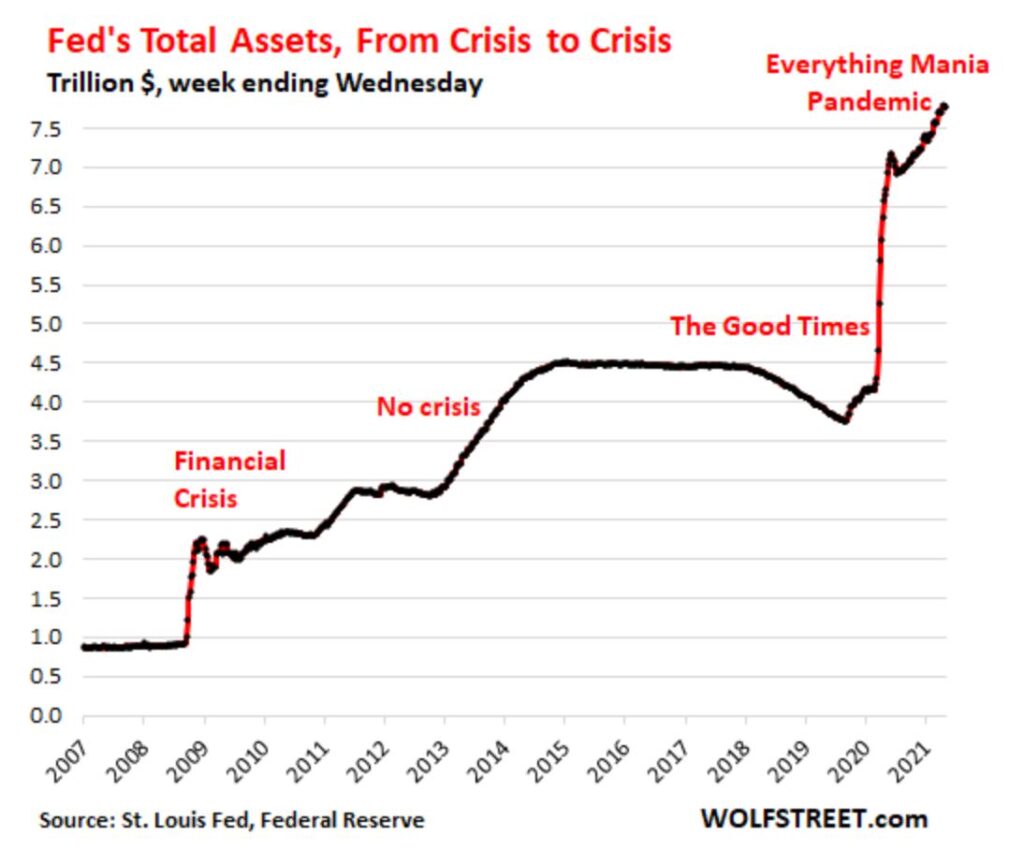 The National Debt of the United States is already reaching Crazy Town levels: 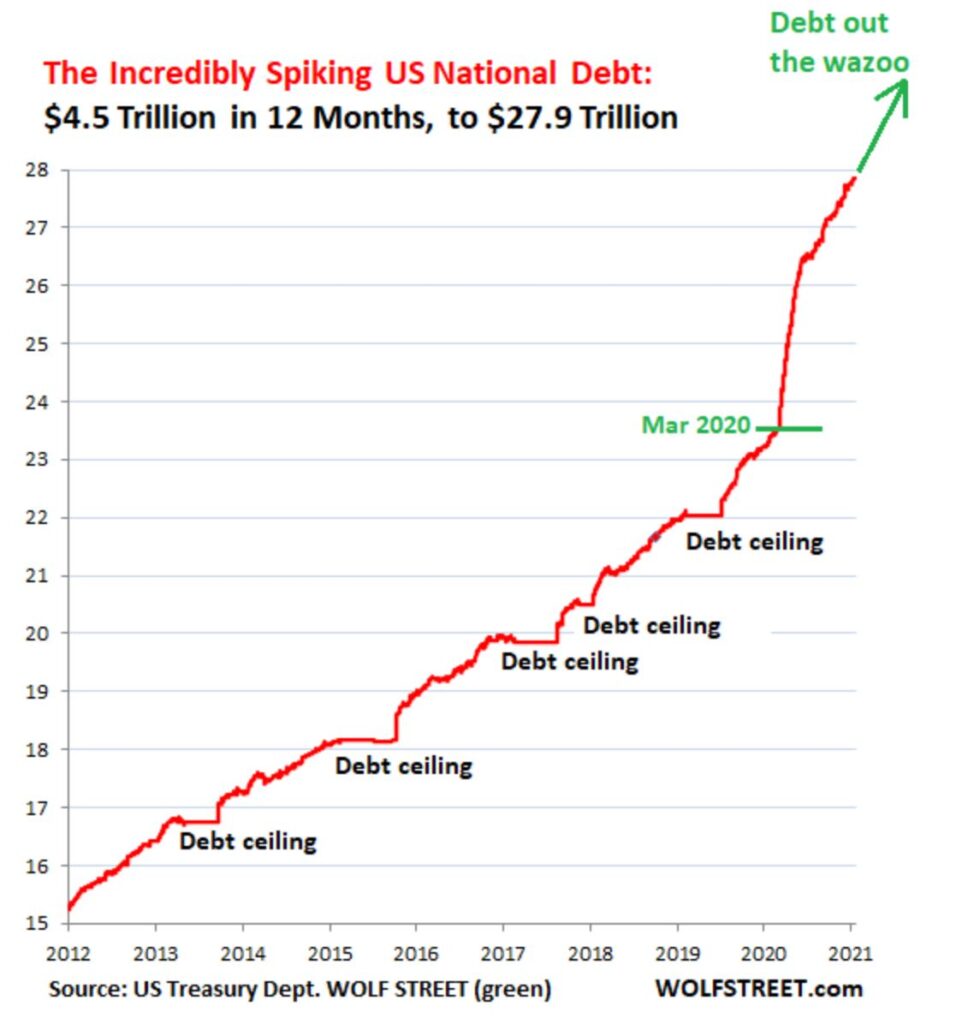 The early start of inflation is now here and higher consumer prices are the result: 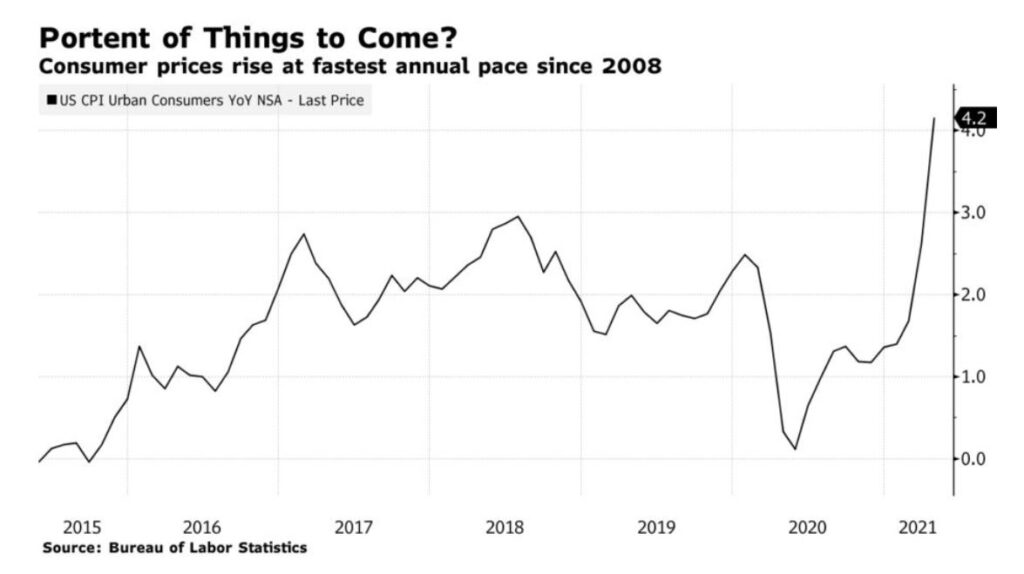 The historic speed of the recent inflation data has surprised some (note the upper right violet colored dot showing the last 10 data points): 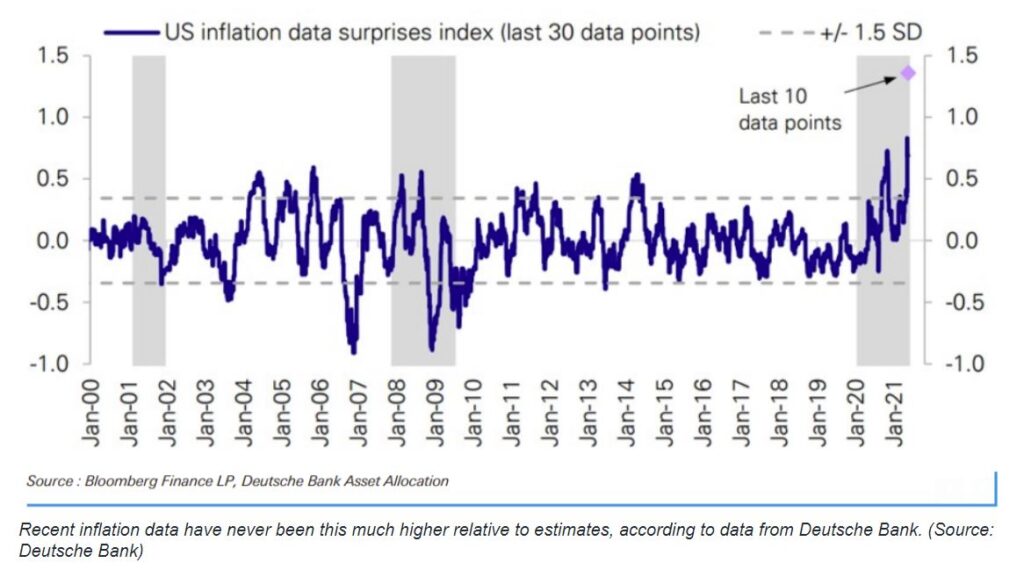 Existing home prices and especially new home building prices are through the roof and the trend started in mid-2020: 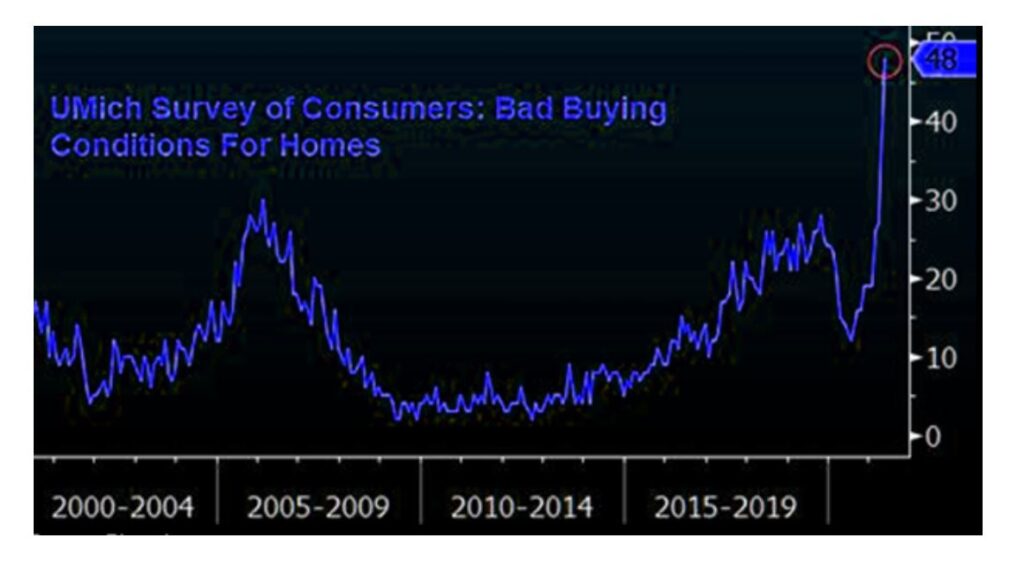 What is the biggest current worry amongst asset account managers?  Inflation and the Fed’s reaction to inflation.

Will technology be harmed as so many on Wall Street keep repeating?  In my opinion, no.  I believe that technology stocks will lead the market higher for another 8 years: 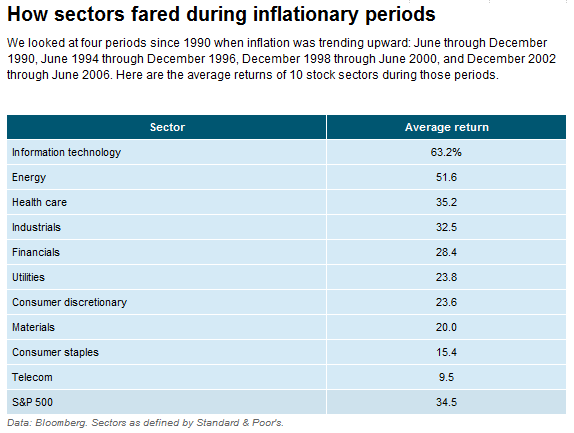 But now?  Despite the start of inflation, we’re still on easy street because of easy monetary policy.  There is money sloshing around everywhere that you look.  And as I’ve been saying since early April of 2009: “We’re in the stock bull market of our lifetimes.”

The U.S. stock market never moves higher in a straight line, but it continues to zig-zag higher and higher and no, it is not currently overvalued… we should soon see the S&P-500 @ 4500. 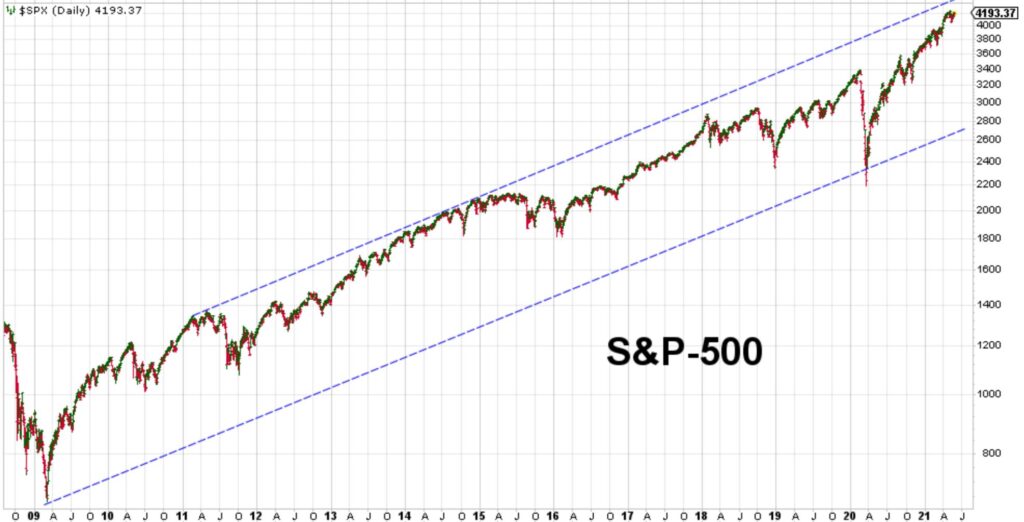 MarketCycle Wealth Management is in the business of managing the investment accounts of people like you.  We try hard to earn our keep.  The entire process is easy and the first 3 months are at no charge. 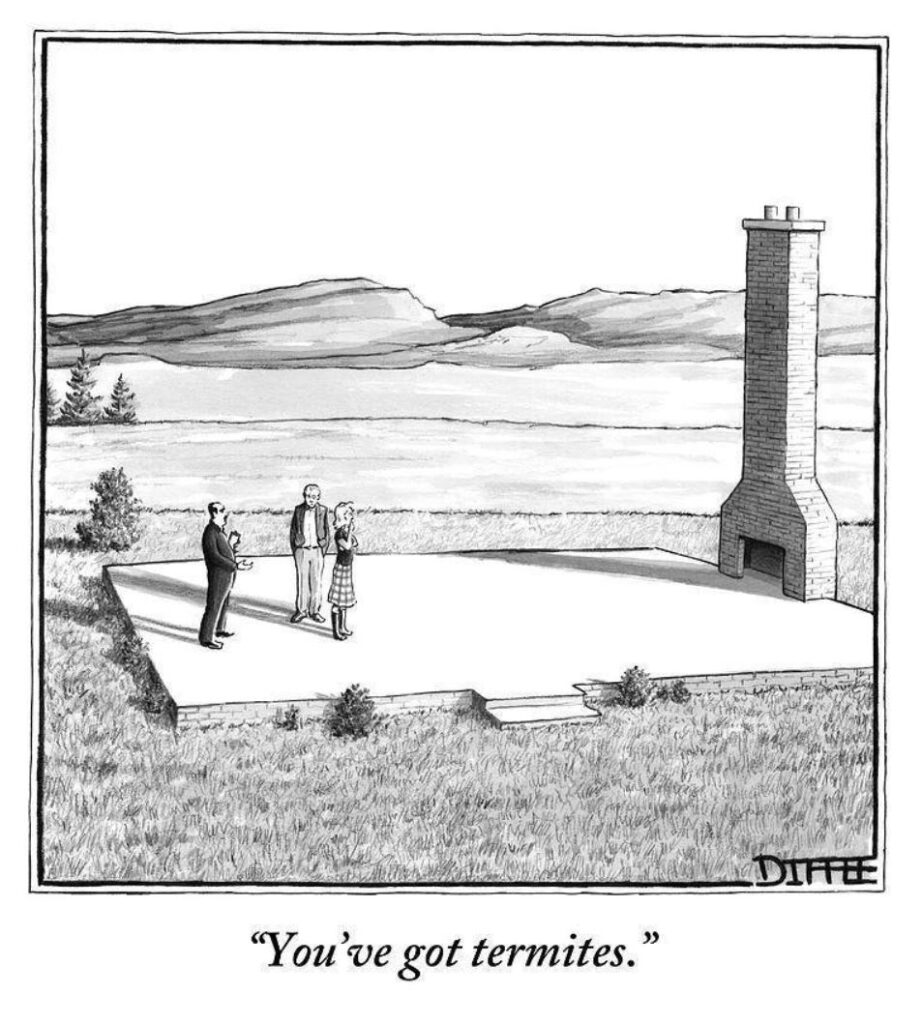