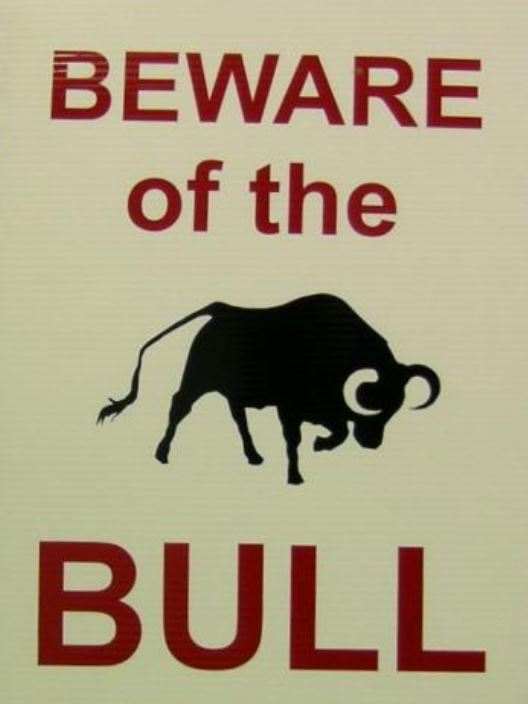 For anyone that has a mental block about reading financial information, you literally just have to take it one sentence at a time.  I always attempt to include definitions on uncommon words such as “Fibonacci.”  And there is a PDF/PRINT function at the bottom of the website.

Everyone on Wall Street is waiting for two things to happen before the market can move back up:

Mr. Market is smarter than are its individual participants and when everyone is looking for the same things, then something else is always going to happen.  So there is a chance that the VIX does not go above 40 (it came close on Wednesday May 11th) and that there is no classic capitulation this time around, but that people just keep waiting in vain for capitulation to occur.

Mr. Market is the ultimate professor of Psychology.  This time around, the purpose of this corrrection seems to be to cause so much confusion that everyone just gives up hope… and then the market will go higher again.  Confusion?  Yes.  I normally send out Client Market Updates that might say “today is the exact day of the stock market bottom.”  I’ve been able to do that repeatedly.  This time around I’m a bit head shy and perhaps hedging my bets.  Or am I? 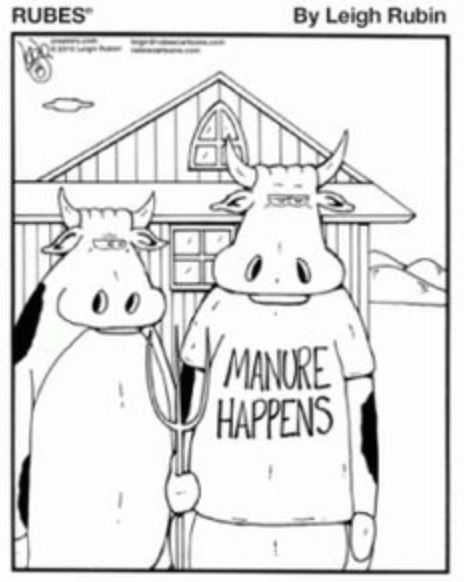 What could drive the market higher from here?

Please see the blue line below.  When the number of bearish professional investors (advisors and fund managers) spike to this high of a level, then typically a bottom is about to be formed.  At each of these spikes, investors feel that the world is about to end because of “X” reasons that “will never end” and the market “will never recover.”  (Chart courtesy of Tom McClellan.) 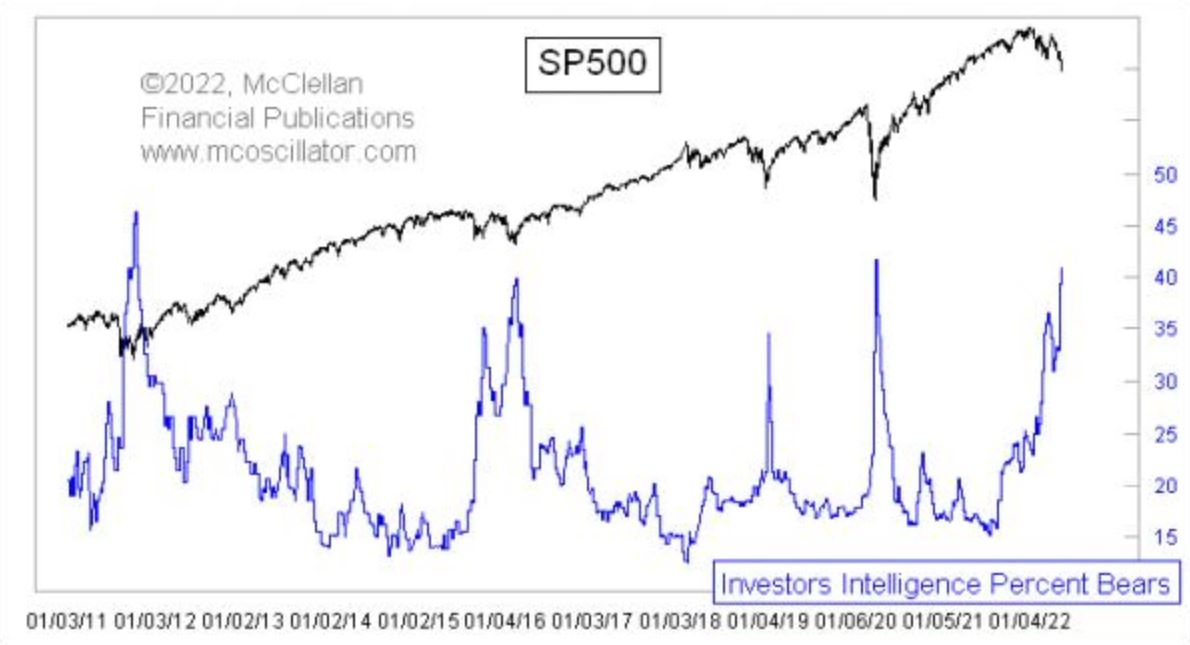 So, does everyone agree with me that this is still just a typical & routine correction and not the end of the world?  No, nobody agrees with me.  The other day a friend expressed his concerns that the well known Albert Edwards, Chief Global Strategist at Societe Generale, is calling for the S&P-500 to drop to 3000.  I had to point out that Albert Edwards has been bearish and continually (on the record) calling for a stock market crash since 2011, all while the S&P-500 has actually been climbing steadily higher and higher for that entire 11 year period.  So, there’s that.  When the markets are temporarily going down, the financial press and TV shows repeatedly trot these people out of the shadows.  It makes for good publication readership and great TV ratings, but it also causes unwelcome confusion.

Below is the May 15, 2022 chart of the S&P-500 showing the strong (bullish) bounce off of support.  There was bullish buying (after the spike down) at the end of the day on Thursday and very strong bullish follow-through on Friday.  It was a sort of non-attention grabbing capitulation.  On Thursday’s spike down, the S&P-500 hit 3858.  In late-December of 2021, MarketCycle stated that we were about to enter a high risk period and we called for a bottom at around 3815.  What we just hit was close to our original prediction.

It is funny how investors are worry free when markets are sky high and overvalued and risk is sky high, but they then panic when the risk has already dissipated and markets are lower and offering bargains.  Again, risk is very much lower now than it was in January when everyone was euphoric.  Will the market be up next week?  Have we hit the market correction bottom?  Well, what I do know is that, even as many investors are growing more pessimistic (is this you?), market conditions and indicators are rapidly switching toward bullish.  Many market corrections have “three legs down” (down, bounce, down, bounce, biggest leg down, up?) and this chart shows the S&P-500 touching our (red) downward sloping trendline three times… with the third touch being mid-day on this past Thursday.  I originally drew this red trendline on March 1st and projected it out into the future, waiting for it to be touched this third time.

There is a chance that stocks will want to touch the blue ‘Fibonacci line’ below and then bottom there because a lot of traders are looking for that.  Fibonacci is a mathematical equation that dates from 200 BC with continual additional work & updates beginning from that early date.  The numbers reveal a pattern that is seen literally everywhere in nature and some people transplant this concept onto investment assets.  This may work, at least in part, because millions of technical analysis traders across the globe react to them in unison, creating a self-fulfilling prophecy.

This nautilus shell is designed by nature via a Fibonacci mathematical sequence: 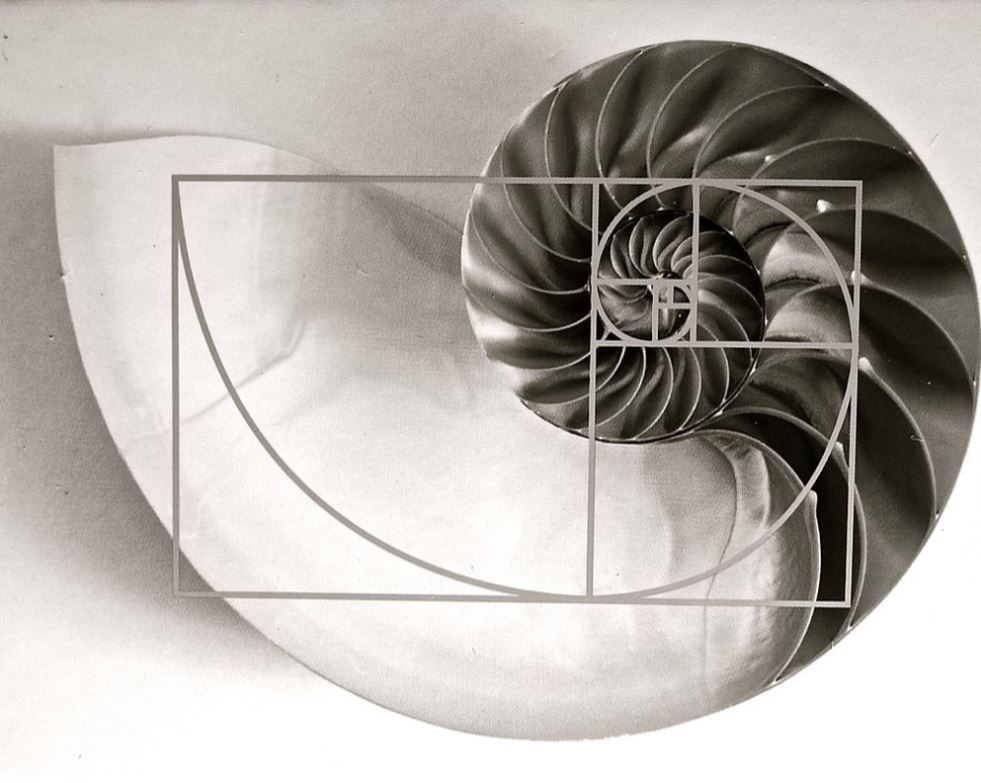 For the upside, there might be, might be, (right now or soon?) clear sailing way up to 4450 on this chart where we would then, as always, carefully re-evaluate.  This is all a bit of a moving target and we must re-evaluate anew each and every day.  This would have been a shallow technical correction if not for the Ukraine war adding to the drop.  Even with that, it would have been shallower without the current Chinese total-shutdowns adding even more to the drop.  But odds are that we now start to react more positively (bullishly) to any additional bad news and even the Federal Reserve will do what it always does which it “talk” alot and not actually raise rates as high as they are currently threatening to do.  And one thing that I look for is markets starting to move UP on any bad news that should drive them down and that is already happening now.  I’m seeing bullish signs. 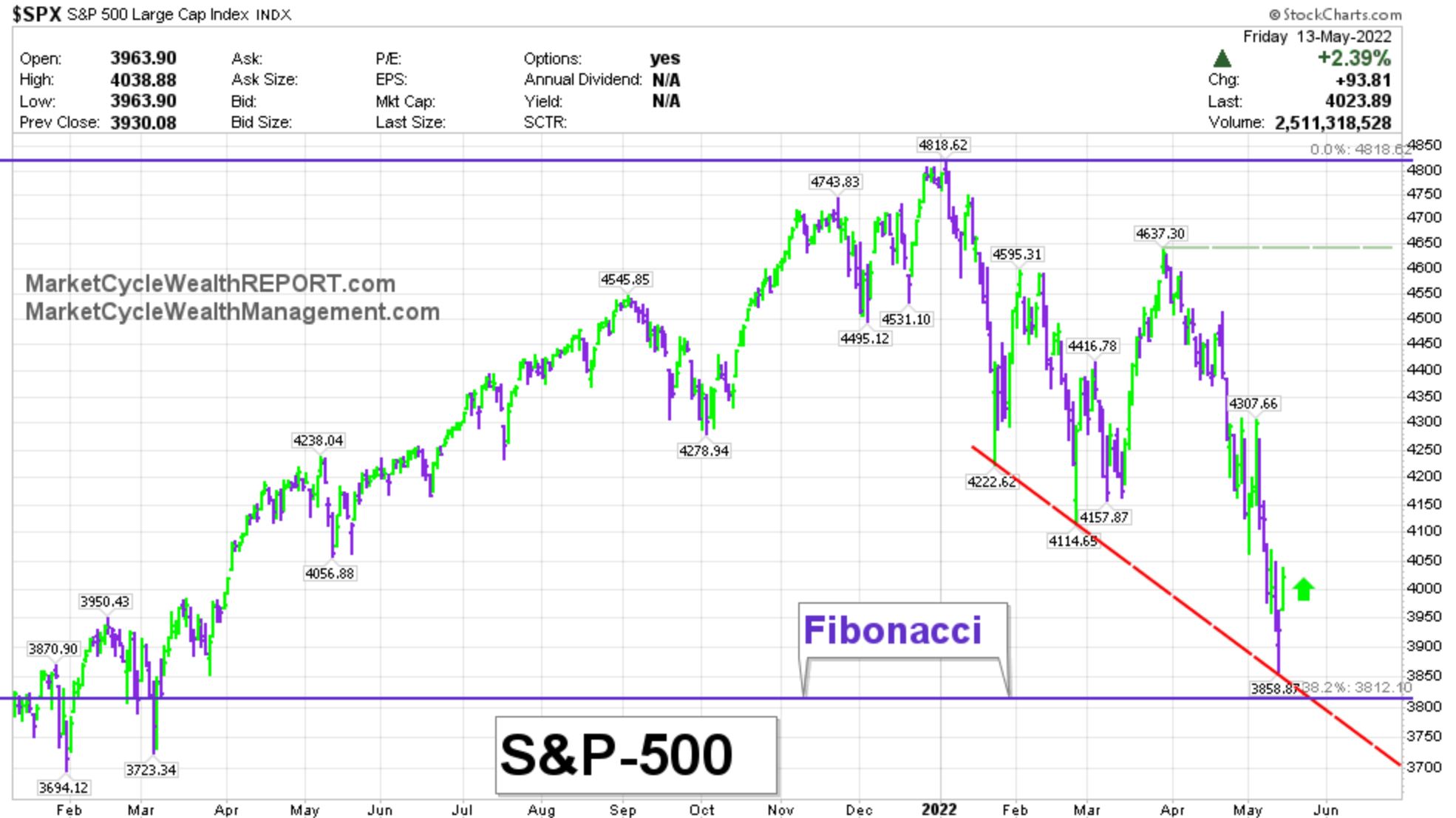 In early November of 2021, right at its peak, MarketCycle predicted that BITCOIN would fall to $30,000 as its first level of correction and that if it fell below this support line, then it might fall even further.  This downside target was reached (and then temporarily surpassed) this past week.  Total investor crypto-currency losses for the first 4 months of 2022 are now at a whopping $1-trillion!  It is possible that crypto speculators are in store for even more losses.  Final bottom support is way down at $7500, although it might not reach that level anytime soon.  If it did, it would certainly attract my attention as a screaming buy signal. 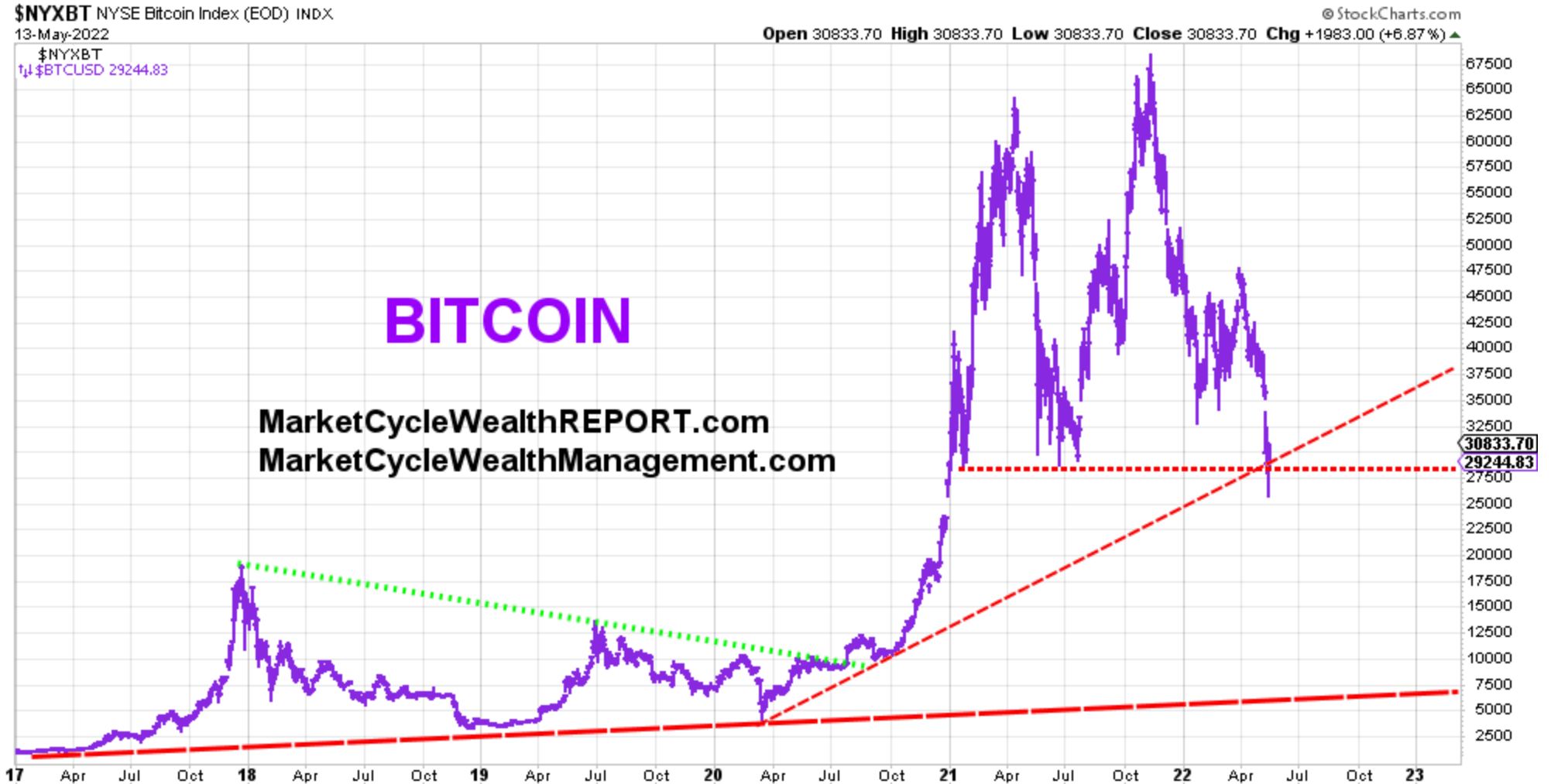 And we’ll close with this chart of GOLD.  The following chart shows MarketCycle’s trading signals for gold since the year 2001… only two buys with one sell in between during a 21 year period.  Clients joined with MarketCycle at various times, so not everyone participated in this entire move.  This chart shows why people shouldn’t constantly be jumping in and out of investments. 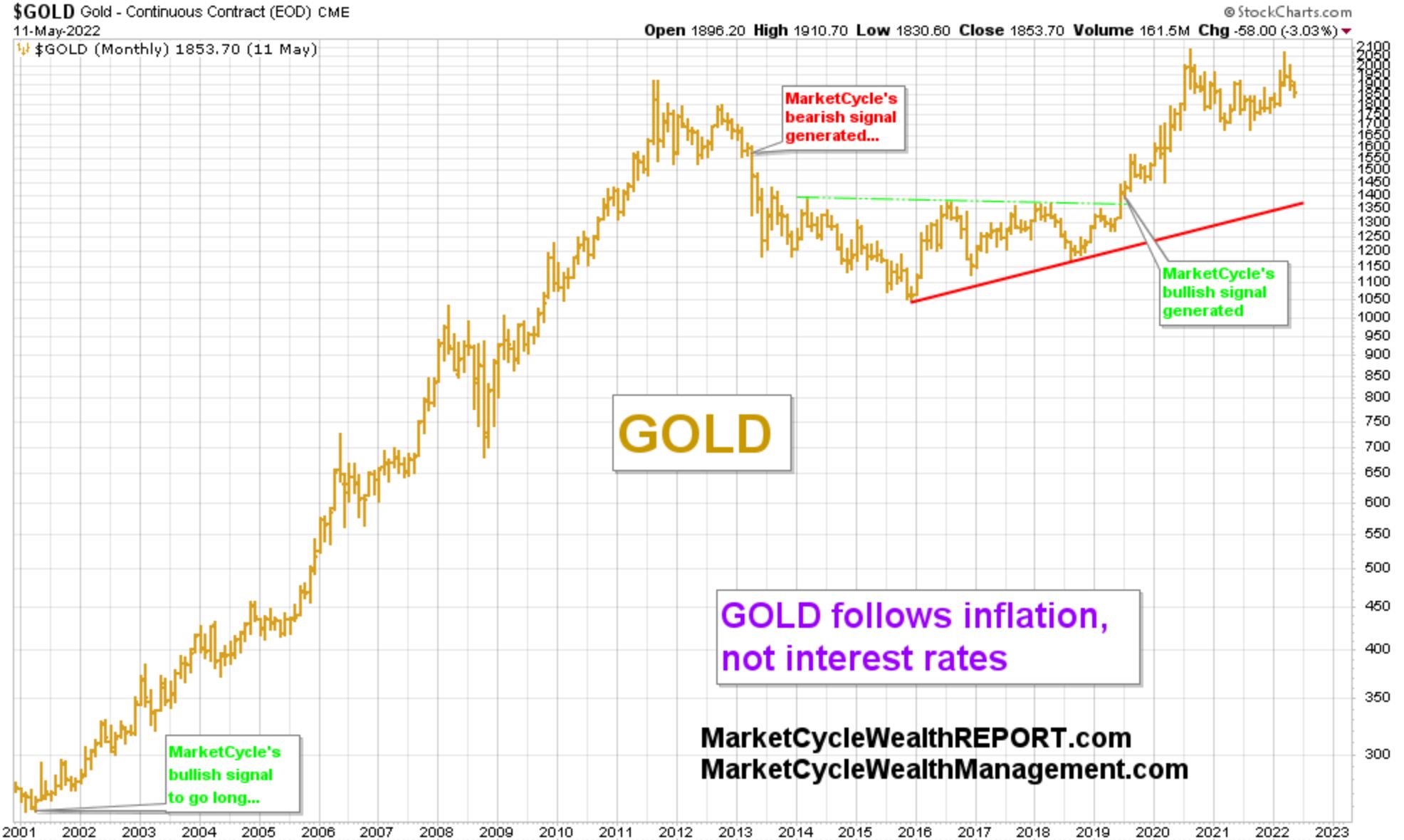 That’s it.  Thanks for reading!

MarketCycle Wealth Management is in the business of managing your investment account through rough waters.  It is easy, low cost and smart because professional management can easily pay for itself. 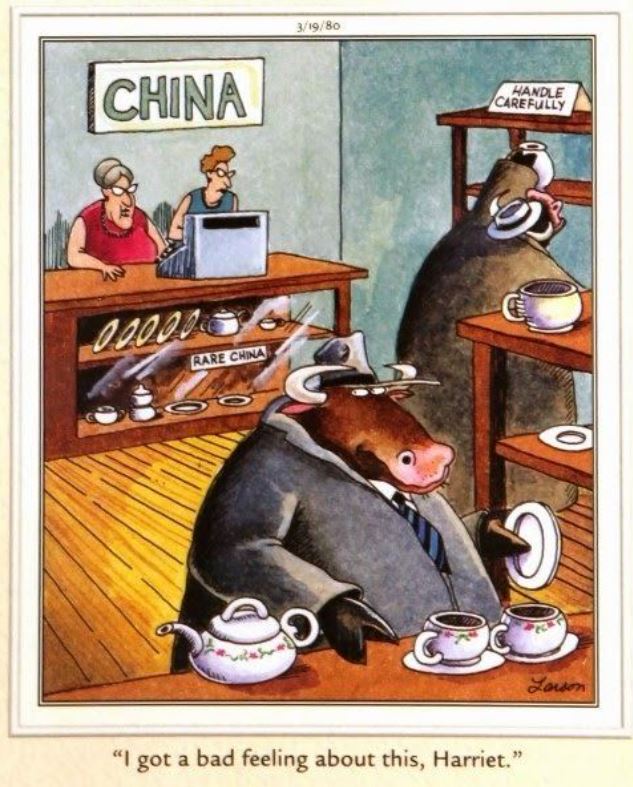